There are now several examples on this forum and the FB groups of Lithium cars suffering from fatal BMS board failures which render the IMA completely inoperative.
Owners are then left struggling trying to obtain expensive spares parts for these rarer Lithium cars and then swapping them out which is fairly tricky and involves removing the IMA pack etc.

There are 4x 10 cell BMS boards in the Lithium IMA pack labelled A,B,C,D each with a unique CAN $ID.

In two recent cases the code reader HDS or a decent expensive equivalent has identified a failed D board which when replaced did not correct the issue.
Only replacement of the A board fixed the issue. So why is this?

Possibly......
1) Both boards had failed but only D was identified as faulty by the HDS for some reason.
2) Only the A board had failed but it was miss-identified by the software as the D board.

The fact the HDS and other codes readers are misidentifying the board suggest Honda's own ID OBDII DTC database is in error.
The other code reader manufacturers also use the same database licensed from Honda, so the fact they are wrong as well is understandable.

So if we get an HDS D board indicated failure it seems likely an A board might actually be required.

So this leaves us with a problem of finding spare BMS boards as they have to be replaced like for like (A for an A etc)
Once the available stock of breakers yard A boards is used up people are stuck.

I have checked with Honda UK today and the BMS boards are classed as part of the IMA battery and are not available separately.
New IMA battery = £6500 UK or $8500 LOL.....

There are two physical types of PCB A & B inside the 4 BMS units (A,B,C,D) which have different battery tap connector pinouts.
So we have two of each PCB A & B type in our four board total.


Each of the 4 boards has a unique arrangement of 103 (10k) resistors in the pictured areas which generates the CAN ID.

Ok it's actually four x 10k possible resistors pulling 2 inputs high or low (0-5V) to give 2 bits and four possible ID configurations.
Only two resistors out of the possible four are populated on any board.

The resistor config is noted by the onboard cpu at first power on and then the board has that ID fixed.

I was able to change the ID of a test board using the above idea and soldering/desoldering these resistors.

In the pic above the truth table for these two points A + B is as follows. High being 5V and Low being GND.

Extrapolating this further we might expect the HDS software to believe that....

If this theory holds true the software will miss identify the faulty board in every case!!!!
i.e. If it identifies board C as faulty we know it is board D!!!

So the bottom line in all this is we can change the CAN ID of boards by swapping resistors if we run out of any particular one..

We basically potentially doubled our supply of spare boards. (Note I have not actually tried a modified board in the car, but don't see why it shouldn't work.)

I will edit/refine this post and add more info as I dig it out and the member in Germany with the problem currently updates us with the result.

The pics below show the resistor configurations on the four boards for the CAN ID's.


Example. For board C to become A you would move a single 10k resistor (the one marked '103' in the white box on the right) on board C to match board A above.


* Warning. (I'm not talking about board ID in the below here) *
Do not try and use a connector layout PCB A in a PCB B position or you will let out the expensive magic smoke!

I note there are two boards available on e-bay at the moment from the same US vendor, but you would have to confirm with a photo of the part that it was the one you wanted.

I can't see any obvious issues.


Code:
Code:
Both boards are transmitting the right CAN ID and data that appears to be identical bar slight voltage sensing variations between the two boards.

This first test is without the benefit of the MCM sending them periodic commands so perhaps the bad board simply fails to respond.
U

PeterPerkins said:
If this theory holds true the software will miss identify the faulty board in every case!!!!
i.e. If it identifies board C as faulty we know it is board D!!!
Click to expand...

ah, that makes alot of sense.. Probably it could be the reason why my C board error did not get fixed by replacing C board..
Thank you for all this information @PeterPerkins . Im waiting for My clone HDS to arrive then I will look deeper into this direction too.

PeterPerkins said:
Do not try and use a connector layout PCB A in a PCB B position or you might let out the magic smoke!
Click to expand...

That is true and I learned it the hard way 😔. There was no data available online regarding this error except for what Peter Wrote, and a local workshop suggested my Cell Blocks could be faulty too. So Curious Me, wanting to rule out complete Cell Blocks as a potential problem, Succumbed to my curiosity and changed the positions of the full module Block that are behind C and B Boards with each other without noticing that there must be a reason why the connectors going into the boards on both the modules are different in color (light Brown and grey).

(I just wanted to see if I can move the error to some other board by changing the position of the modules configuration within the pack) but as soon as I connected the daisy chain connectors at the bottom, that 'Magic Smoke' started coming out of both C and B board and by the time I was able to disconnect the connectors, both the boards were burned already 😔. had to replace both of them with the spare civic's BMS Boards now and C board error is still there. So what I learn from all this is "Don't ever Try to change the positions of the boards or the Module Blocks even, it will burn the ICs on both the boards and render the already rare boards completely useless".

Joined Jul 21, 2017
·
1,382 Posts
That was a shame as moving the cell blocks or the BMS boards like that would not have moved this particular fault anyway as you hoped.
The BMS boards are identified on the BUS by the CAN ID not the physical position on the end of the pack.
The CAN parallel wiring is the same for all. (Not the cell connector wiring plugs though as you found out!) 🔥

Even if you had swapped compatible board A with C or D with B the HDS would have still given the same fault/board ID.

Sounds like you need a D board and luck that your 'experimental swap' has not damaged anything else.
U

PeterPerkins said:
That was a shame and a waste as moving them like that would not have moved the fault anyway as you hoped.
The BMS boards are identified on the BUS by the CAN ID not there physical position on the end of the pack.
The CAN wiring is the same for all. (Not the cell connector wiring plugs though as you found out!) 🔥
Click to expand...

Yeah im aware of it now. Im fairly new to all of this and have no prior experience in these electrical issues related to cars, let alone this Honda's IMA technology. this is the first time i am facing Such a big issue in this car since I got it 4 years ago, So mostly Im just experimenting with the stuff as I have no other choice (all the workshops here suggested me to change the full battery pack and don't understand what the actual problem is)

PeterPerkins said:
Sounds like you need a D board and luck that your 'experimental swap' has not damaged anything else.
Click to expand...

Apparently it did not damage anything else (Hopefully) as all the other Data on the HDS were same as before once i put everything in the right place. i have now ordered my own HDS to look further in detail. hoping for the best.

Joined Jul 21, 2017
·
1,382 Posts
@Uzair Mir For your suspected wrongly indicated C board fault do do you have a spare D board or a B board you can reconfigure by moving the CAN ID resistor to be a D?
U

PeterPerkins said:
@Uzair Mir For your suspected wrongly indicated C board fault do do you have a spare D board or a B board you can reconfigure by moving the CAN ID resistor to be a D?
Click to expand...

i returned the A and D Board. I really wanted to test this B board theory but unfortunately I am already using that spare B board as my own B board got burnt in my stupid experiment. I can get that D board back though

Uzair Mir said:
I can get that D board back though.
Click to expand...

I think that is your only answer/hope for now. Swap out just the D board and keep your fingers crossed.
Unfortunately you are using boards that are not known 100% to be good so that can be very tricky.

That is the second time it has done that to my knowledge with these same faults on different cars. 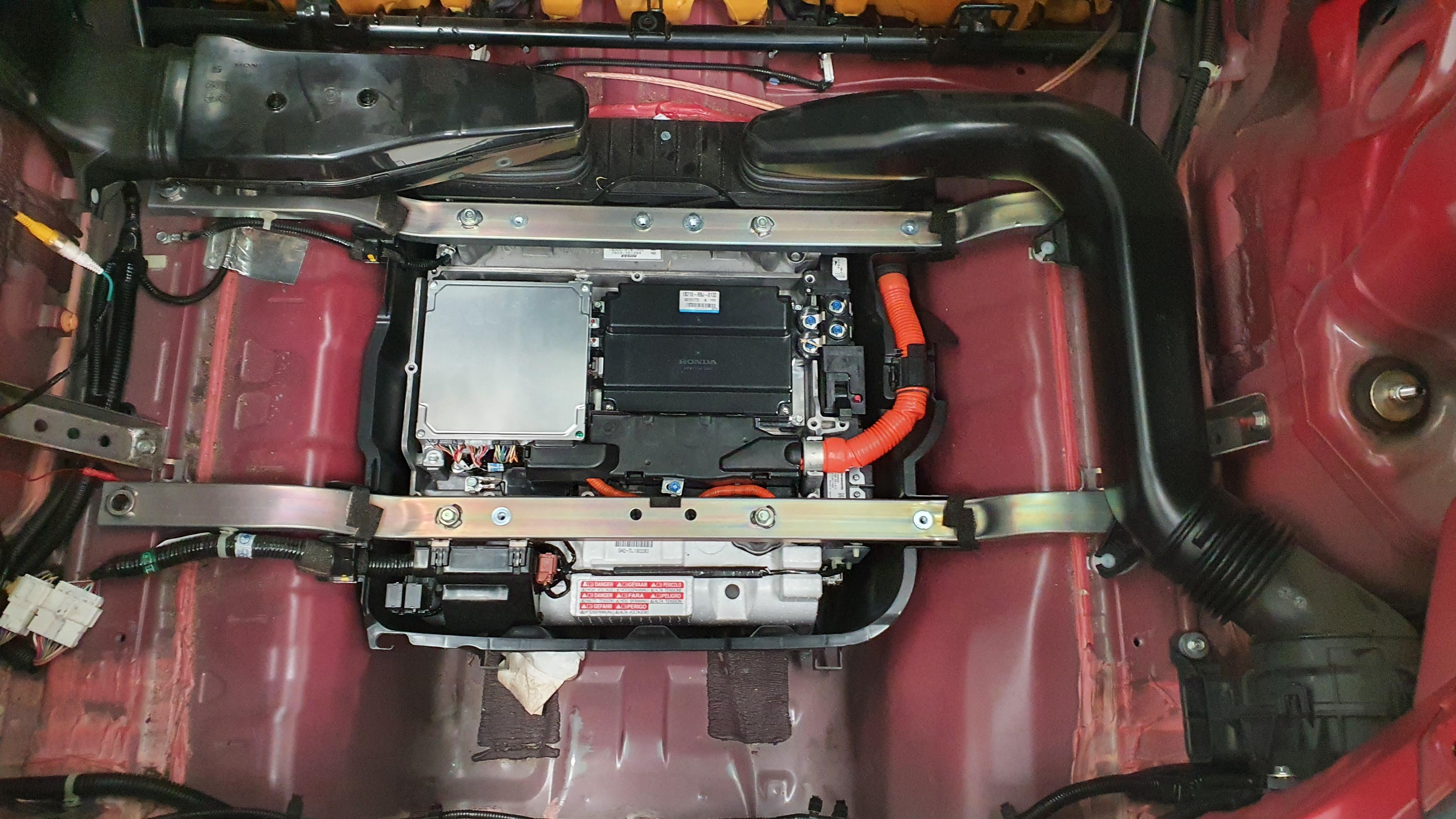 Joined Jul 21, 2017
·
1,382 Posts
So working on this today. I can confirm the HDS database or the physical labelling of the BMS boards is borked.

I also found the location for this info in the HDS data so I can correct it and display the true information for my OBDIIC&C display.


I can confirm the two failed boards I have are both A boards.

One has cell voltage readings that are ~100mv higher than the other three boards.

Note also the big discrepancy between Highest and lowest!

The other has readings that are again 50mV higher than the other three boards.

The suspect D board was fine and had been misidentified by the HDS. (It was A that was faulty)

I was able to reconfigure my spare C board (change the CAN address) by moving a tiny SMD resistor
as detailed earlier in this thread, so it can and did work in place of a failed A one.

I notice the Civic BMS board cases are a very slightly different size compared to the CR-Z ones.
They won't quite bolt onto the CR-Z battery pack. The bolt holes are 2-3 mm out.
However the PCB inside is the same in both.
If you were using a Civic BMS board in a CR-Z you would simply have to swap the PCB over into the bad CR-Z board case and vice versa.

Strangely BMS board D has the IMA CAN BUS termination resistors (~120R) (I would have expected these to be inside the MCM/BCM) oh well..
If you intend swapping board D with B or vice versa you would also have to modify these resistors.